In recent days there has been a lot of hand wringing among the people of the church.  There is a general feeling that everything is out of control and that the world is careening rapidly down to the hill into the abyss of hell.  The announcement last week of the United States Supreme Court decision in regards to same-sex marriage has caused an uproar among people of faith.  I have had the privilege of living in the United States and know how patriotic most of God’s people are. There seems to be a very close association between government and the church. To many government is a reflection, or ought to be, of Biblical values. END_OF_DOCUMENT_TOKEN_TO_BE_REPLACED 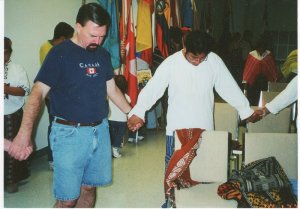 ou have heard the old saying, “I am praying for patience and I want it now!”  It is so true in many areas of life that what we need to learn only comes as we apply the principle of patience in our lives.  My former professor and pastor often says in regards to people who strive for positions that they are not ready for, “That person has not suffered enough.”  He is saying that we desire that God place us in positions of employment that we have not the maturity nor the experience to handle. END_OF_DOCUMENT_TOKEN_TO_BE_REPLACED